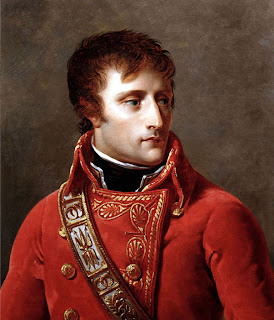 
*Napoleon married Josephine de Beauharnais in 1796, when he was twenty-six; she was a thirty-two-year-old widow whose first husband had been executed during the Revolution. Until she met Bonaparte, she had been known as 'Rose', a name which he disliked. He called her 'Josephine' instead, and she went by this name henceforth. Bonaparte often sent her love letters while on his campaigns. (wikipedia.org)

I wake filled with thoughts of you. Your portrait and the intoxicating evening which we spent yesterday have
left my senses in turmoil. Sweet incomparable Josephine, what a strange effect you have on my heart! Are you angry? Do I see you looking sad? Are you worried? ...

My soul aches with sorrow, and there can be no rest for your lover; but is there still more in store for me
when, yielding to the profound feelings which overwhelm me, I draw from your lips, from your heart a love which consumes me with fire? Ah! it was last night that I fully realized how false an image of you your portrait gives!

You are leaving at noon; I shall see you in three hours.

Until then, mio dolce amor, a thousand kisses; but give me none in return, for they set my blood on fire.